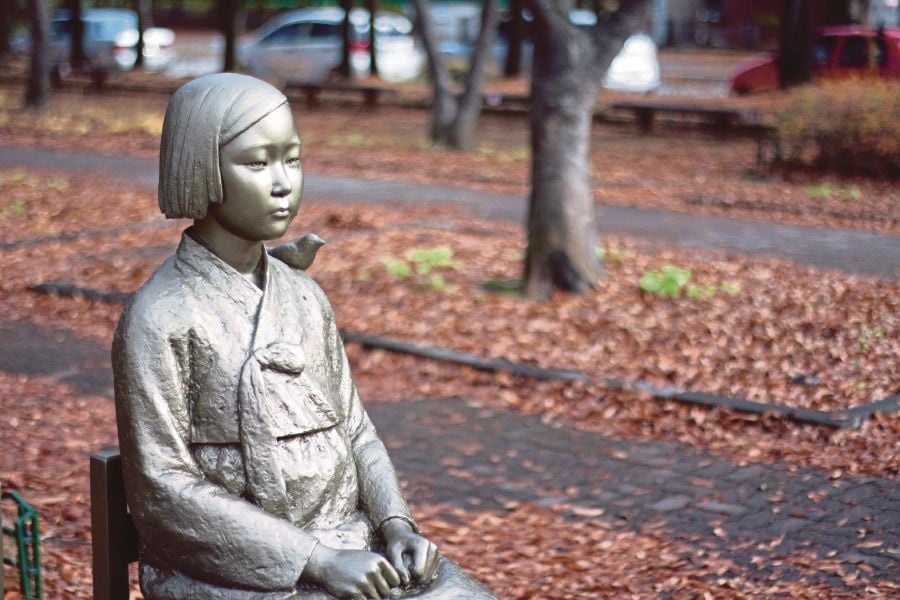 Statues dedicated to comfort women have been erected in South Korea and other countries. During World War 2, comfort women had to hand over most of their earnings to the brothel’s manager, but had to use their own money for clothing, hair care and cosmetics, resulting in many girls being heavily indebted.

FROM 1932 through 1945, the Japanese Imperial Army and Navy exploited a system of forced prostitution in all occupied territories in China, Southeast Asia and the Pacific Ocean, enslaving thousands of women and girls who represent 34 nationalities. Newly discovered evidence shows that these “comfort women” were exploited to advance Japan’s war efforts.

For 74 years, the Japanese government vehemently denied that the system of forced prostitution was rolled out by the Japanese Imperial Army and Navy, sanctioned by Emperor Hirohito. Although 34 countries, city-states and autonomous regions are involved in this ongoing issue, it is still framed as a “neighbour quarrel” between Japan and South Korea.

The reason Japan has been able to get away with this war crime is because nearly all involved countries prefer trade relations over the human rights of the victims. Only the governments of China and the two Koreas are unrelenting in their demand for an official apology, combined with war reparations. With the 75th commemoration of the World War 2 approaching, irrefutable evidence has surfaced in the American and British National Archives: the money trail of the Imperial brothel system.

Two Japanese banks are involved in this reconstruction: the Bank of Taiwan, established in 1899 in Japan’s first overseas colony, and the Yokohama Specie Bank (YSB), both set up to support Japanese militarisation. By 1941, the Bank of Taiwan had 34 branch offices: four in Japan, 15 in Taiwan, 10 in China and the Chinese island Hainan, and one each in Manila (the Philippines), Singapore (British Malaya), Batavia and Soerabaja (Dutch East Indies) and the island of Nauru.

The Yokohama Specie Bank, established in 1880 with an original investment of 3 million yen, was the largest bank in Japan, specialising in foreign exchange and foreign transactions. Its largest shareholder was Emperor Hirohito, who owned a stake of 22 per cent. Apart from the headquarters in Yokohama and four branches in Japan, there were 13 offices in China, next to Singapore, Manila, Jesselton (British Borneo), Rangoon (Burma), Batavia and Soerabaja, plus branches on the island of Sumatra. YSB exceeded the Bank of Taiwan in the total amounts of deposits and loans.

To finance the expansion of the Japanese army, navy and airforce from 1931 on, government bonds were issued, covering 50 per cent of the capital of both war banks. To sell these bonds, the Japanese government forced the banking institutions to use their clients’ savings deposits. Simultaneously, a brothel system enslaving young sex slaves was rolled out in the occupied territories to prevent venereal diseases and to keep all army, navy and airforce personnel contented.

Providing servicemen with “comfort” wasn’t a freebie though: a percentage of the fixed fee they paid to visit a “comfort woman” was deposited at either a Bank of Taiwan or Yokohama Specie Bank branch. Affidavits of involved Japanese personnel prove that the brothels were run at a profit to advance Japan’s war efforts.

Every week, the forcefully detained women received a medical check-up. They always had to use a condom, disinfect themselves after each visit and take a daily bath. They were obliged to hand over most of their earnings to the manager. At the same time, the costs for clothing, hair care and cosmetics were from their own account, resulting in many of the girls being heavily indebted.

What did the “brothel deposit” practice by the Imperial Army look like? An example: in Batavia in the Dutch East Indies, Japanese hotelkeeper Wasio Awochi, by order of the Gunseikanbu (military regime), furnished 20 small houses in the Gang Horning, adjacent to a restaurant and a bar.

The brothel was called the Sakura Club. Caucasian Dutch and Eurasian women and girls, many of them lured out of internment camps with false promises, were employed there from Sept 10, 1943, on. Girls of 11 and 14 were placed in the brothel in a later phase.

While members of the military police regularly checked the visitors, the Gunseikanbu inspected the financial administration. After they finished work, the women handed in the receipts they received from their customers. They were required to earn at least 50 guilders a day, which means sex with at least three visitors.

While thousands of young women and girls were sexually exploited, the tide was turning from mid-1944 on. During Operation Reckless in the strategic island of New Guinea, allied troops liberated 20 American “comfort women” from officers’ brothels in the town of Hollandia. The women were nearly crazy from drugs and dope, as an American pilot observed.

After Japan’s surrender on Aug 14, 1945, the Yokohama Specie Bank was classified as an enemy bank. As Supreme Commander of the Allied Powers, American general Douglas MacArthur ordered all branches to be liquidated. Outside Japan, the dismantling of the branches was carried out by the local authorities, with the United Nations Property Unit of SCAP overseeing the whole process.

Under supervision of the ruling Kuomintang party of the United States-supported General Chiang Kai-Shek, the Bank of Taiwan was reorganised as the first government-owned bank. In practice, it meant that all Japanese Imperial Navy comfort women’s profits of the bank’s branches in the former occupied areas were confiscated by the Kuomintang government.

Even if this is a long time ago, the outstanding debt to victims of Japanese forced prostitution has to be settled. By the Kuomintang party to all indigenous Taiwanese, Korean and Chinese women who were abused in brothels in Taiwan. By the MUFG Bank, the legal successor of the Yokohama Specie Bank, to the victims who were forced to work in brothels in Japan, including Japanese, Korean and Eurasian women.

As for the former colonisers who dismantled the branches of the Bank of Taiwan and Yokohama Specie Bank immediately after the war, additional archival research has to take place. This concerns the US (the Philippines), Great Britain (Burma, British Malaya, British Borneo and Hong Kong), France (Indochina) and the Netherlands (Dutch East Indies).

The Chinese government has liquidated war bank branches on the mainland and Hainan island, as has Australia in Australia New Guinea and Nauru. The Portuguese Banco Nacional Ultramarino in former Portuguese-held Timor functioned as an enemy bank during wartime as well. These bank archives also have to be checked for “brothel deposits”.

Finally, the Japanese Imperial family has to provide transparency on the stocks it owned in both war banks: how did the family members personally benefit from the great wealth of these banks where the earnings of victims of Japanese forced prostitution were deposited? With new emperor Naruhito preaching reiwa (beautiful harmony), closure for the thousands of comfort women and their families can only be obtained through an official apology.