The 1993 report named after then-Chief Cabinet Secretary Yohei Kono details how women were forced to work in brothels. 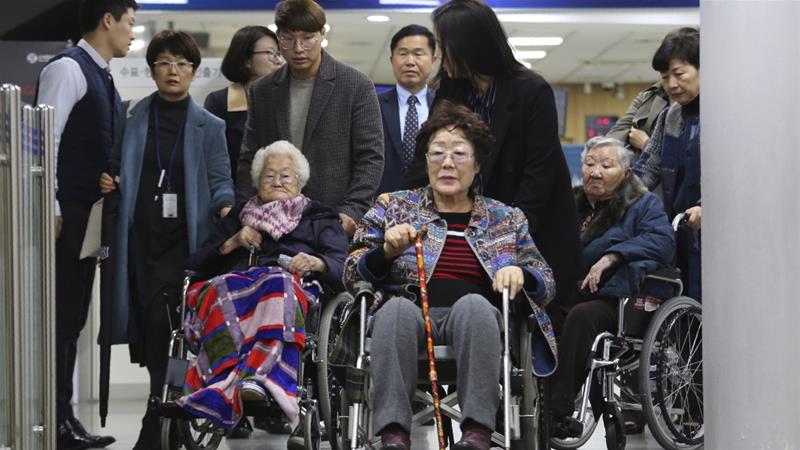 Diplomatic relations between Japan and South Korea have worsened since the top court in Seoul ruled in favour of the women seeking compensation from Japanese firms for wartime forced labour [File: Ahn Young-joon/AP]

The Imperial Japanese Army asked the government to provide one “comfort woman” for every 70 soldiers, Japan’s Kyodo news agency said, citing wartime government documents it had reviewed, shedding fresh light on Tokyo’s involvement in the practice.

“Comfort women” is a euphemism for the girls and women – many of them Korean – forced into prostitution at Japanese military brothels. The issue has plagued Japan’s ties with South Korea for decades.

Later, there were also several “comfort women” reported from the Philippines during the second world war.

One dispatch from the consul general of Qingdao in China’s Shandong province to the foreign ministry in Tokyo, says that the Imperial Army asked for one woman to accommodate every 70 soldiers, Kyodo reported late on Friday.

Another dispatch, from the consul general of Jinan, also in Shandong province, notes “at least 500 comfort women must be concentrated here” as the Japanese forces made further advances, Kyodo said.

The 1993 “Kono Statement”, named after then-Chief Cabinet Secretary Yohei Kono in whose name it was issued, acknowledged Japanese authorities’ involvement in coercing the women to work in the brothels.But that did not stop disputes over the issue, such as the degree of involvement of the Japanese government.

“From the latest document … we got detailed information on the operation of the brothels – how many soldiers were so-called assigned to a comfort woman,” said Yoon Mi-hyang, head of the Korean Council for the Women Drafted for Military Sexual Slavery by Japan.

“This is a clear sign that the Japanese government is accountable for forcefully recruiting Korean women for sexual enslavement.”

South Korea reached a settlement with Japan to resolve the comfort women dispute in 2015, in which Japan apologised to victims and provided 1 billion yen ($9m) to a fund to help them.