(CNN)A South Korean judge has ordered the Japanese government to pay damages to 12 victims of war-time sexual slavery, in a historic ruling over war atrocities that have strained the two countries’ relationship for decades.The victims sued the Japanese government in 2016 for kidnapping, sexual violence, and torture during World War II. They had been in their teens and early 20s during Japan’s occupation of the Korean peninsula, and were subjected to dozens of forced sexual acts by Japanese troops every day, the judge said in the ruling Friday.These girls and women forced into sexual acts of slavery are known as “comfort women.” The practice was sanctioned and organized by the Japanese Imperial Army before and during World War II.

South Koreans take to the streets to pay respects to ‘comfort women’ activist Kim Bok-dongThe Japanese occupation ended in 1945, but the victims suffered great psychological trauma in the years after the war, as well as pervasive social stigma, the judge said. The judge granted the full amount of $91,000 (100 million won) requested by the plaintiffs, adding that the damage they suffered surpassed that amount.Japanese prime ministers have apologized in the past, and Tokyo believed the issue was settled in 1965 as part of an agreement to normalize relations between the two countries. But South Korea was a military dictatorship at the time, and many Koreans maintain the deal was unfair.Another landmark deal in 2015 saw another apology and a pledge of $8 million for a foundation to support the surviving “comfort women.”Despite these existing agreements, the plaintiffs had the right to sue for damages, the judge said on Friday. 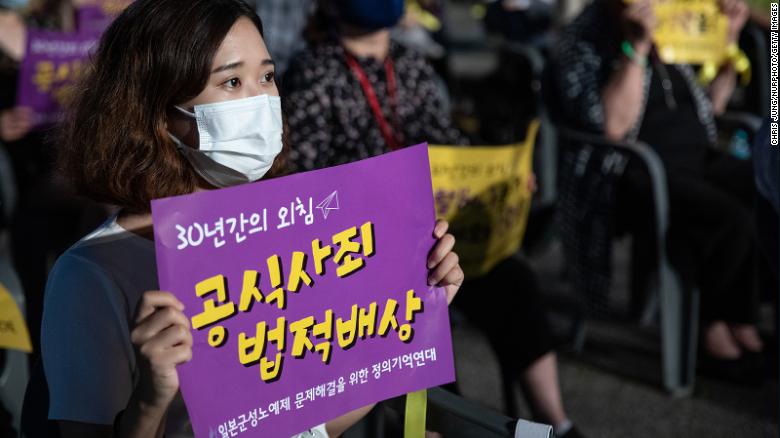 A woman holds a sign demanding a formal apology and compensation from Japan, at a rally marking the 2020 International Memorial Day for Comfort Women in Seoul, South Korea.In a statement after the ruling, the South Korean Ministry of Foreign Affairs said the government “respects the court judgment and will make every effort it can to restore the honor and dignity of the ‘comfort women’ victims.”It acknowledged the 2015 deal between the countries, and said the government would also “review the impact of the ruling on diplomatic relations and will make every effort to continue constructive and future-oriented cooperation between Korea and Japan.”Japanese officials strongly criticized the ruling, however, with Chief Cabinet Secretary Katsunobu Kato calling it “extremely regrettable” and “absolutely unacceptable,” according to a Reuters feed of the press conference Friday.Kato added that the Japanese government was not subject to South Korean jurisdiction, and that the country had repeatedly called for the case to be dismissed. “We strongly demand that South Korea as a country take an appropriate response to correct this breach of international law,” he said.

Experts estimate up to 200,000 women from South Korea and other Asian countries were forced into Japanese sexual slavery. The Japanese army recruited women, by deception, coercion and force, for its brothels, according to a United Nations report on the issue.”A large number of the women victims speak of violence used on family members who tried to prevent the abduction of their daughters and, in some cases, of being raped by soldiers in front of their parents before being forcibly taken off,” the report said.

Despite Japan’s apology and compensation, South Korean activists say the apology did not go far enough and many demand further reparations.The topic remains a bitter point in the two countries’ strained relationship. In 2017, a memorial statue became the center of a diplomatic spat, with Japan halting talks on a planned currency swap, delaying economic dialogue, and recalling two diplomats from South Korea.Relations have only deteriorated since then. In 2018, South Korea’s supreme court ruled that its citizens can sue Japanese companies for using forced Korean labor during World War II. Tensions spiked in 2019, when the two countries entered a heated military dispute. Months later, a trade war broke out as Japan dropped South Korea as a preferred trading partner, and South Korea had downgraded its trade ties with Japan in response.“As a victim of great suffering from Japanese imperialism in the past, we, for our part, cannot help but take Japan’s ongoing economic retaliation very seriously,” South Korean President Moon Jae-in said after the retaliatory economic measures. “It is even more so because this economic retaliation is in itself unjustifiable and also has its roots in historical issues.”

The historic animosity is also felt among many citizens; more than 36,000 South Koreans signed a petition during the 2019 trade dispute calling on the government to take retaliatory action against Tokyo. Many South Koreans also called for a boycott of Japanese products on social media.The conflict even made its way into athletics, with South Korea’s parliamentary committee for sports calling for a ban on the Rising Sun flag at the 2020 Tokyo Olympics (which has since been postponed until 2021 due to the coronavirus pandemic.) The controversial flag symbolized Japanese imperialism and war atrocities, South Korean officials argued.”The Rising Sun flag is akin to a symbol of the devil to Asians and Koreans, just like how the swastika is a symbol of Nazis which reminds Europeans of invasion and horror,” said An Min-suk, the chair of the parliamentary committee for sports.But the Olympic organizers refused to ban the flag from competition venues, arguing that “the flag itself is not considered to be a political statement.”