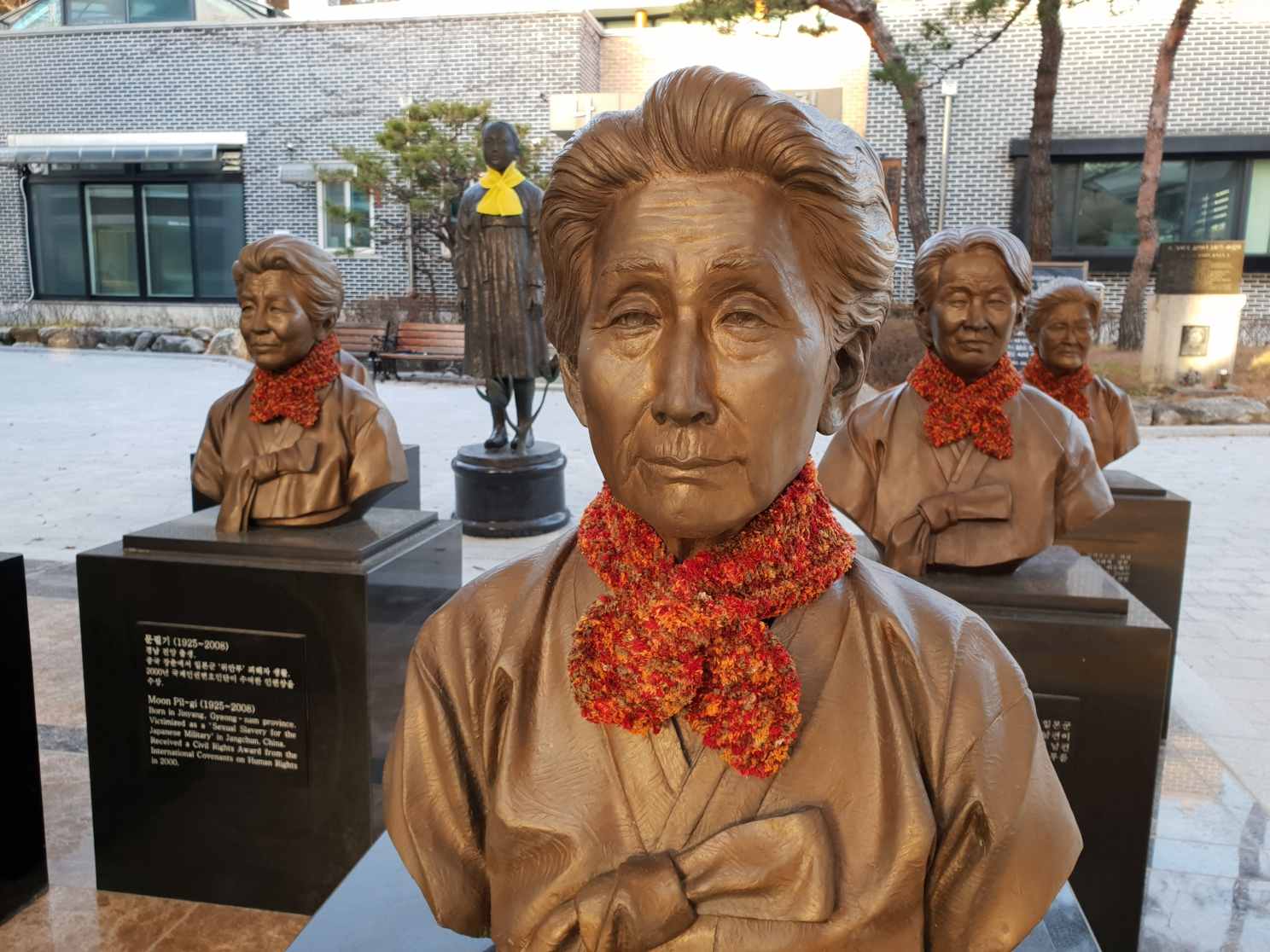 Statues of former comfort women who have passed away at the House of Sharing. /CGTN Photo

Yi Ok-seon lies on her bed in a small room at House of Healing in South Korea.

At 92 she is surrounded by photographs of meetings with South Korean President Moon Jae-in and other dignitaries, and a few of her as a young girl.

But there is a gap in this photographic history. There is no trace of her time spent as a sex slave for the Japanese army during World War II.

Yi Ok-seon says she was dragged from her workplace at the age of 15, by two men, one South Korean and one Japanese. She was sent to China where she was forced, through violence, to work in a Japanese military brothel.

Yi was a fierce opponent of the compensation sent by Japan as part of a deal struck with South Korea in 2015 and, like many former so-called “comfort women,” applauded South Korea’s decision to disband the Japan-funded foundation set up to financially assist former wartime sex slaves.

“Japan brought the money to (South) Korea to reach an agreement. That money was given to us to shut our mouths up. That’s wrong. I felt good when they got rid of the foundation,” says Yi, perched on the edge of her bed with a fierce glint still in her eye as she speaks of the events that stole her youth.

Scrapping the compensation aspect of the deal was not the only part of the agreement to break down.

One of Japan’s key complaints was the comfort women statue outside its embassy in Seoul.

Under the compensation deal the comfort women statue was supposed to have been removed. Instead, it remained and about 50 more were placed across South Korea, a move that so angered Japan that last year it temporarily withdrew its ambassador from Seoul.

“As the agreement between (South) Korea and Japan has not been scrapped, we started protesting by insisting on the abolition of the agreement. We will help the grandmothers by protesting here until the agreement is scrapped,” says Kim Sun-kyung, a student who is one of the many volunteers who spend time in a makeshift translucent tent next to the statue to ensure it is not removed.

As part of the deal Japan did offer a statement of “apology and remorse” as well as compensation, to be distributed through the now defunct foundation.

But the director of the House of Sharing, Ahn Shin-kwon, says former comfort women were not consulted in the lead-up to the agreement, which they believe avoided explicit responsibility and was meant to silence the issue as much as settle it.

“Despite the war crimes, human rights abuses and women used as tools of war the agreement did not include education for the current generation and future generations, rather they tried to hide the victims’ problems forever,” says Kwon.

Ahn says the issue can be settled if a more human approach is taken that fully acknowledges historical wrongs and seeks genuine reconciliation.

Across the hall from Yi Ok-seon, another former comfort women Kim Soon-ok sleeps with the help of a respirator.

Time is running out for these women who continue to ask for one core thing, an apology from Japan that is linked to a full acknowledgment of what the women were subjected to.