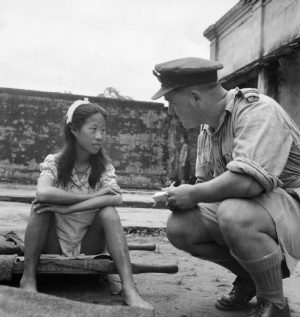 When I arrived in Nagaland, a small state in northeast India, to write a piece about the Naga people and their battle for independence, I never thought I would run into an absolutely extraordinary facet of World War II history — and, as I later learned, a potentially forgotten (or concealed) piece of history concerning the Korean “comfort women.”

Among the various interviews I was putting together, I encountered an 82-year-old gentleman in a village near Kohima. He is the father of the woman who ran the guesthouse where I was staying. He was born in 1937 and spent his whole life in the village of Kigwema.

In April 1944 he saw with his own eyes the British clash with the Japanese in the mountains and hills that surround this area, where a few villages are scattered: Kigwema, Mima, Zakhama, and Viswema. The battle in question, the Battle of Kohima, was among the hardest and most memorable in this Asian region, so much so that the English consider it their greatest battle.

In Kohima the Japanese who arrived from the Burma trail intended to cut off the supply enemy front at Imphal, where another clash was taking place between the English-Indian army and the Japanese.

During our interview, which was mainly focused on the present political situation in Nagaland, the old man swerved often into the past, to the time of World War II. Having majored in modern history in college, I was more than willing to follow the man’s rhetorical detours. At one point while I was listening to recollections of war memories, in his elementary English, the old man mentioned the presence of Japanese female soldiers.

I flinched. I was sure I heard wrong. In my study of that time period, I have no recollection of women being present in the ranks of the Japanese army. So I asked the man to repeat his last words. He does: “There were Japanese military in this village… including some armed women.”

I was astonished by what I heard, but still I could not quite accept it. I therefore asked the man’s niece, an 18-year-old called Baby (who would help me as translator also in the next interviews), to please ask him the question a third time, but this time in his own native language.

The old man repeated for the third time: yes, he saw women with the Japanese army. And he kept going, describing how they were dressed (in military uniforms). He remembered particularly well their strange “flip-flop boots” (this particular memory, as we will see, became essential to corroborate the reliability of his testimony).

The old man insisted that the women also carried weapons — smaller weapons than the men’s, but they were armed. I asked him if he remembered the soldiers speaking in Japanese, but he couldn’t recall. Instead he kept telling me about those boots.

A day later, I asked Baby if we could confirm her grandfather’s memories with another elder. Another day passed and Baby told me that she found another old man of the same age who had similar recollections. I wanted to talk to him, too.

This man, unlike the first, spoke only the local language and my friend translated for me the whole conversation. This man did not remember hearing the soldiers speak, but he was certain he also saw the “Japanese women.” He also mentioned those boots again; he remembered them vividly because they had some unusual cut to the feet.

I considered this an absolutely useless detail at first. But just for the sake of it, I showed him some photos on my smartphone of the famous Japanese geta sandals, thinking they could be what he had seen. He said no, that wasn’t right.

At that point I had a sudden realization: Could he by chance be describing tabi boots, the boots that Japanese farmers often wear? I do volunteer farming in Tokyo once a week, and some of the other volunteers wear the same kind of boots.

I showed the man the photo of tabi boots and bingo! They were exactly the boots that he recalled the women in the Japanese army wearing. These boots have a unique shape, and only the Japanese used them at that time. In fact the Kohima Museum of War, which I would later visit, showed tabi boots in a picture as part of the standard uniform of the Japanese soldiers.

This old man’s recollection was full of other details. He even started to mimic how the soldiers used their katanas to fight the enemy. Like my first interviewee, he also confirmed that the women were armed with smaller weapons than the men. He even remembered what the Japanese yelled when they approached his house: “Kora” (an exclamation that the elderly in Japan still use to this day).

He started imitating the gestures and expression of the soldiers who had entered his home over 70 years ago. He remembered 12 soldiers, some of whom were sharing weapons, as there must have been a lack of them during that point in the battle.

In the following days I would interview two more people who confirmed sightings of women with the Japanese army.

A 96-year-old woman remembered the female soldiers very well. They were a little roundish, and “kinda unpleasant,” she said matter-of-factly, “especially if I compare them with the beautiful English nurses who were staying in Kohima’s hospital.”

When I told the old woman that there are no documents recording the presence of women soldiers in Kohima, she looked at me with an astonished face, as if frozen in a shock. “But I saw them with my own eyes!” she said as my translator-friend giggled at me for my unintentionally insulting mistrust.

In Mima, another village in the area, I interviewed another old man who had vivid memories of that time because his family in fact “hosted” (not voluntarily, as may be easily guessed) four Japanese soldiers, two of them women.

He remembered that the soldier slept on a sort of straw mat, the two women and the two men separated. The women had short hair, and wore some kind of baseball-type hats. They went out in the morning and returned in the evening. One man, named Homato, gave orders. The men made the lunch, and the old man was surprised it was not the other way around. Then they all ate with chopsticks. The men carried a katana and a weapon while the women carried backpacks and strolled down the hill together, a few paces apart.

The old man took a pen and wrote down the names of the soldiers. He remembered the names of each of the four soldiers he hosted and their military chief. He even remembered, to my amazement, how to count in Japanese: “ichi, ni, san…” And he even recalls how they said “we go down to the village” in Japanese. “Mura ni ikou.” His memory is indeed extraordinary.

I have contacted a few historians and experts for comment about the presence of Japanese women in combat zones alongside the Japanese army. They all agreed on one point: To their knowledge, there is no record of this. But there is one theory that they are open to accept as a possible explanation.

That theory was given to me by Professor Takeshi Fujii of Tokyo University of Foreign Study. Fujii thinks these women could only have been “comfort women” from Korea.

In Rangoon, Myanmar, at that time there were Japanese geisha, mostly for the entertainment of high-ranking military officials, but there were also “comfort women” — those girls and women forced into sexual slavery to placate Japanese troops. Those comfort women were mostly Koreans, and they were the only women in close contact with the Japanese soldiers at that time (there are written accounts about this, for example the memoir by Korean Mun Oku-chu of her time as a comfort woman on the Burmese Front.).

Robert Lyman, a British military historian, confirms that “comfort women certainly accompanied the Japanese 15th Army into Manipur in 1944, and some of them did reach Kohima. Wherever the Japanese units deployed, comfort women accompanied them.” Indeed, in his book Japan’s Last Bid for Victory, Lyman writes that General Ren’ya Mutaguchi “ordered, ten days after the initial advance began, that the entire complement of Fifteenth Army’s prostitutes, or comfort girls…  to be despatched to Imphal, so as not to waste any time before his men could be rewarded for their arduous endeavors…”

So we know the comfort women were there, but why would the army have them fight? Was it desperation?

For Fujii, that’s exactly the reason. Japan was already on a downward spiral concerning the outcome of the war. The soldiers knew they wouldn’t survive those battles, but they had no choice. That’s why, Fujii conjectures, those women were given weapons and military clothes, and were sent along with the Japanese army (we know also that it was customary to give Japanese names to the comfort women). Of course if that is the case, said Fujii, it would never be mentioned in the official records, and that’s why we don’t find it in the history books.

And this makes all the more valuable the witnesses I interviewed, who can help shed light on a significant piece of history that so far has remained buried.

If the comfort women were forcibly employed as impromptu soldiers in a battle everyone knew had no chance to be won, in face of the horrible conditions in Nagaland at the time, then their exploitation went even beyond the coerced “physical entertainment” of the soldiers that has sparked (and still sparks) so much controversy between Japan and South Korea in the past years.

The story of these courageous women, who will probably remain anonymous forever, deserves to be remembered. I hope that anyone who has more information will come forward, whether more eye witnesses or anybody in possession of written documents. Hopefully, piece by piece we will be able to uncover the full scope of the crimes that were committed during World War II — in an effort not to grudgingly point fingers but to better understand our past.

Cristian Martini Grimaldi is an Italian journalist and the correspondent from Japan for both La Repubblica and La Stampa.

By Cristian Martini Grimaldi, The Diplomat