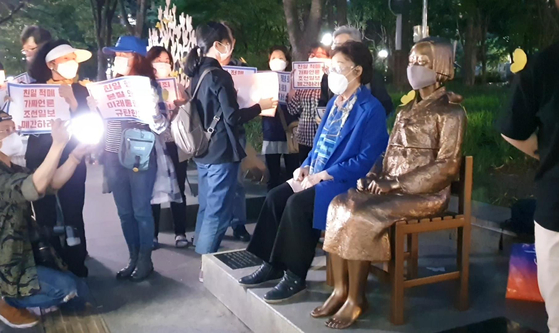 Lee Yong-soo, a ’comfort woman“ survivor and activist, sits next to a bronze statue symbolizing victims of Japanese wartime sexual slavery after making a surprise appearance at a weekly rally calling for a resolution to the issue in Daegu Wednesday evening. [YONHAP]

Lee Yong-soo, the “comfort woman” survivor who recently made public her grievances against a civic group she was affiliated with, made a brief surprise appearance at weekly Wednesday rally in Daegu to extend her continued support to resolving the issue of Japanese wartime sexual slavery.

Lee had previously said she will no longer take part in the weekly rallies organized in Seoul by the Korean Council for Justice and Remembrance for the Issues of Military Sexual Slavery by Japan. Her decision came after she publicly questioned the financial transparency and integrity of the civic group and its former leader, lawmaker-elect Yoon Mee-hyang.

But Lee, 91, a longtime activist for the so-called comfort women issue, joined in unannounced toward the end of the rally in her hometown of Daegu Wednesday evening. The protesters, including students, had not been expecting Lee and greeted her enthusiastically.

Lee at one point sat next to the Peace Monument, a bronze statue of a girl symbolizing the comfort women victims found in different cities nationwide and globally.

“I already said everything I must,” Lee told people at the rally, referring to her second press conference earlier this week. “Please believe those words. Believe that and let us fight together.”

The Korean Council since 1992 has organized demonstrations every Wednesday near the Japanese Embassy in central Seoul to demand an apology and compensation from Japan for forcing tens of thousands of girls and young women into sexual slavery before and during World War II. The Wednesday rallies have since spread nationwide, and the peaceful demonstrations have become iconic to the cause of the victims, euphemistically referred to as comfort women.

When students at the rally expressed concerns over her health, Lee patted them on the shoulders in reassurance. Lee has through her press conferences and media interviews expressed regret that the Korean Council would not even buy lunch for the students who showed up to the rallies over the years.

In a shocking May 7 press conference in Daegu, Lee first aired her grievances against the Korean Council and Yoon, questioning the use of donations. This has led to a series of allegations of accounting fraud against Yoon, who was elected as a proportional lawmaker for the ruling Democratic Party last month. Prosecutors launched a probe into the civic group last week.

Lee held a second press conference on Monday in which she said she had been “used” for the past 30 years but also stressed that her fight for the cause of the comfort women victims has not yet ended. She expressed her belief that students will be the ones to finally resolve the issue, and encouraged educators to teach “correct history” to Korean and Japanese youth.

During an interview with CBS radio Thursday, Lee rejected accusations that she was collaborating with someone or that she had Alzheimer’s and that her memory was faulty.

Lee stayed at the Wednesday rally for only about five minutes and left shortly afterwards. She was on her way back to her residence when she happened upon the rally, joining in when she spotted students.