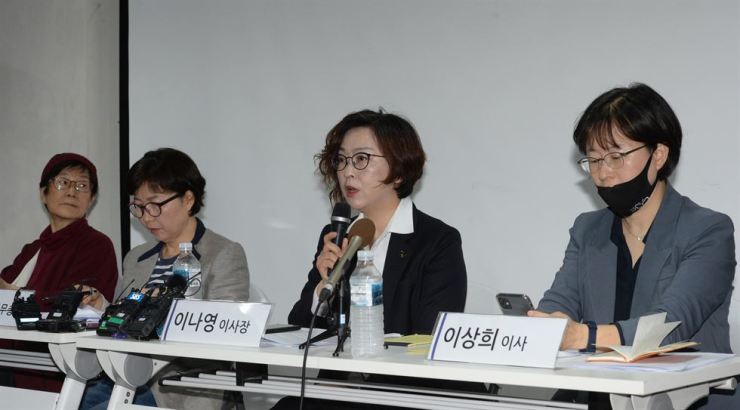 Lee Na-young, third from left, head of the Korean Council for Justice and Remembrance for the Issues of Military Sexual Slavery by Japan, speaks during a press conference in Mapo, Seoul, Monday. Yonhap

Leaders of a civic group which supports women who were coerced into wartime sexual slavery by Japan denied allegations that they all misappropriated donated funds and exploited the victims.

But they apologized for causing the controversy about the transparency of donations, and causing pain for Lee Yong-soo, a 92-year-old victim of Japanese military sexual slavery during Japan’s 1910-45 colonization of the Korean Peninsula.

“We humbly accept the sorrow, anxiety, and anger of Lee, who has been like a family member for the past 30 years. We sincerely apologize for causing her pain by making inappropriate remarks,” said Lee Na-young, head of the Korean Council for Justice and Remembrance for the Issues of Military Sexual Slavery by Japan (Korean Council), during the press conference.

On Thursday, Lee Yong-soo said that she will no longer participate in the weekly rallies which have become a symbol of the victims’ fight for justice against Japan’s wartime atrocities. The Korean Council has organized the rallies since 1992 in front of the Japanese Embassy in Seoul, and “supported” the comfort women for the past 28 years. Lee has been at the center of the rallies since then.

“The Wednesday rally should not be continued anymore. It is not helpful at all and we don’t even know where the donations given by participating students are spent,” Lee said during a press conference in the southeastern city of Daegu.

She said the civic group collects funds from attendees at the rallies but added that none of the money had been spent on the victims.

Yoon Mi-hyang, a former leader of the group, responded after Lee’s remark, saying the group has managed citizens’ donations transparently.

“The donations are used to financially support victims living in shelters, to restore the human rights of the victims by raising international awareness of the issue, and to support other activities related to the issue,” Yoon wrote on Facebook. She then said Lee’s memory was “distorted.”

The group also denied suspicions that they prevented the victims from receiving 1 billion yen ($9.4 million) from the Japanese government to settle the issue in 2015, and that they had been aware of the deal in advance.