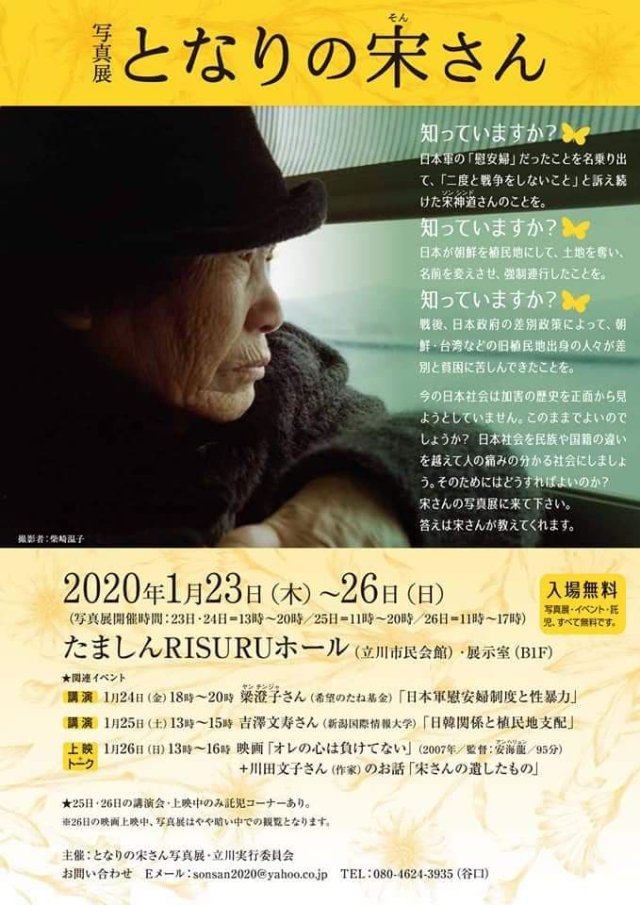 A photo exhibition in Tokyo on January 23-26 celebrated the life and advocacy of Song Sin-do, who campaigned for an apology from the Japanese government for coercing her into sexual slavery during World War II.

Song was one of 200,000 women from Korea, China, Indonesia, the Philippines, and other Japanese-occupied countries who were forced to work in brothels during the war. This scheme was organised by the military to ensure soldiers had sexual access to women.

They were called “comfort women” but that euphemism does not describe their horrific treatment. Many of the women were recruited under false pretenses. Song was told she had a job in a factory, but was instead taken to China, where she was forcibly rotated through seven “comfort stations”. As many as 30 soldiers a day raped her, and she was often beaten. She fell pregnant several times and gave birth twice, but she was not able to keep either child.

It was not until 1991, almost 50 years after the end of the war, that women started speaking out about what happened to them. The shame they felt meant many of them had kept it secret from their families all their lives.

About 80% of the victims were Korean. This was an extension of the entrenched discrimination against Korean people, who lived under Japanese colonial rule from 1910.

Korean women were the first to publicly speak about their experiences, in the early 1990s. They were soon joined by women from many nations and built an international campaign asking for an apology and compensation.

Song was Korean but had lived in Japan since the end of the war. In 1993 she joined the campaign and sued the Japanese government for an apology. A group of Japanese citizens formed an organisation to provide her with financial and legal support.

The exhibition focussed on Song’s life during her decade-long fight for justice. The photos, taken by her support team, show her meeting with UN officials, travelling back to China to visit the building where she was detained, and living a quiet life with her dog in rural Japan.

One photograph is of Song in middle-age, revealing her upper arm tattooed with “Kaneko”, the name she was given during her time at the comfort station.

Other photos show her in her home, doing daily chores and cooking in her small kitchen. They reveal that Song Sin-do, like many of the women, never escaped the poverty into which she was born.

Exhibition organiser Yukiko Harada said: “We were very pleased at the attendance, which far exceeded our expectations. The attendees were not only older people already concerned about the issue but families with children, and students of all ages.”

“As the former ‘comfort women’ grow old and die, many of the younger generations are completely ignorant about what happened to them. Many women all over the world continue to be subject to wartime sexual violence today. I hope that learning about Song’s life will keep the memory of these issues alive and make more people think about wartime sexual violence, military invasions and colonialism and do something about these problems.”

Questioning the historical reality of the “comfort women” system is part of an ongoing right-wing campaign in Japan to downplay Japanese atrocities during WWII. Revisionists deny that women were recruited to the brothels against their will, insisting they were prostitutes who volunteered for the job. Under Prime Minister Abe’s administration, school textbooks have been rewritten to erase mention of the issue and it has pressured publishers in the United States to do the same.

Ultra-nationalist groups in Japan have frequently used protests and harassment to shut down public events that raise the “comfort women” issue. Last year a film festival in Kawasaki, near Tokyo, cancelled the screening of a documentary called Shusenjo: The Main Battleground of the Comfort Women Issue under pressure from officials, before backtracking and agreeing to screen it after all.

Similarly, Japan’s Agency for Cultural Affairs withheld public funding for last year’s Aichi Triennale after it exhibited a statue of a girl representing the comfort women. After threats and protests against the art festival, the exhibition was removed but was later reinstated.

This harassment also has also been felt in Australia. When Bill Crews erected the same statue at his Uniting Church in Sydney in 2016, he was bombarded with threatening letters and was even called into a meeting with John Ajaka, then the NSW Minister for Multiculturalism, and Masato Takaoka, the Japanese Consul-General in Sydney to try and convince him to change his mind.

It remains a politically charged issue between the governments of South Korea and Japan. However, in 2015, the two countries signed an agreement to settle the matter, in which Japan apologised and provided ¥1 billion to a foundation to help the victims.

But the women involved were not invited to be part of the negotiations. They continue to argue that the deal is inadequate and that Japan needs to take legal responsibility. In November last year, they brought a case to a South Korean court arguing the deal was unconstitutional and would prevent them from seeking reparations from the Japanese government. The court later dismissed their case.