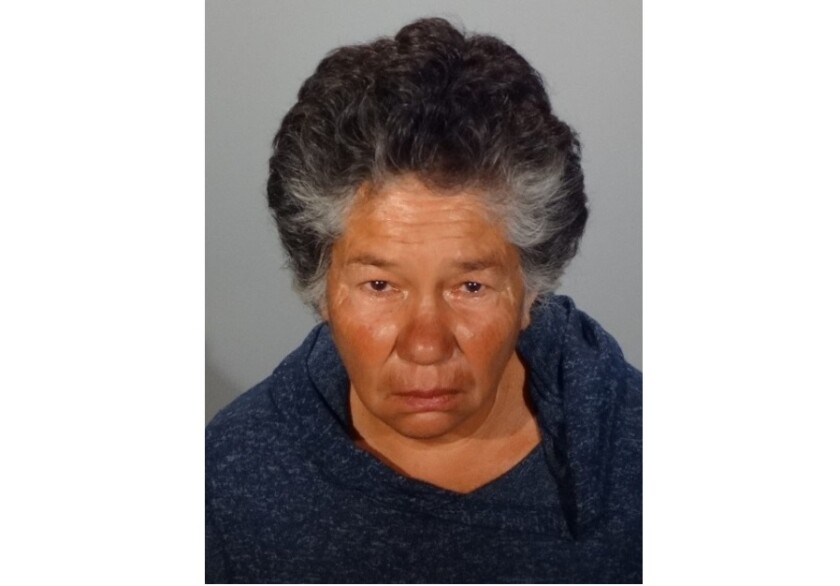 Glendale police suspect a 65-year-old woman is responsible for defacing a memorial dedicated to women forced into sex slavery during World War II and may be connected to other acts of vandalism in the city.

Jackie Rita Williams was arrested Friday on suspicion of felony vandalism. Authorities say she used a permanent marker Thursday to scribble all over the Korean Comfort Women Peace Monument in Glendale’s Central Park.

Police think she’s also behind several previous instances in which the monument was defaced, one of which involved an unknown brown substance being smeared onto the face of the woman depicted on the statue.

“We’re still trying to figure out what her motive is behind this,” said Sgt. Dan Suttles, a Glendale Police Department spokesman.

Surveillance footage from the park shows a woman matching Williams’ description walking up to the statue and drawing on it before kicking over several nearby potted plants.

Williams lives within half a mile of the statue and was in possession of different-colored permanent markers when she was arrested, Suttles said.

She also had a warrant out at the time in connection with a vandalism incident in Pasadena.

Detectives are investigating her possible involvement in a spate of bigoted graffiti scrawled onto and near several buildings along a stretch of Colorado Street between Pacific Avenue and Brand Boulevard.

“There was no isolated demographic. It targeted anyone and everyone — you name it,” he said.

In one instance, a wall at the Armenian-American Council on Aging was defaced with the message “Death to Armenians” in red marker, along with a reference to President Trump.

In a statement, Glendale Police Chief Carl Povilaitis said that the vandalism does not reflect the values of the community and that the department is dedicated to fully investigating the incident.