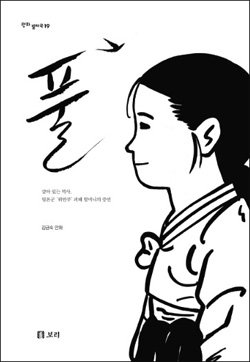 Efforts are underway to publish a Japanese version of cartoon “Pool (Grass)” by Kim Keum-suk, which tells the story of Korean “comfort woman” Lee Ok-seon under the Japanese military, the Tokyo Shimbun reported on Sunday. The Japanese edition of the cartoon book, which was published in Korea in 2017, will have 480 pages, and is scheduled to be released in January next year.

The cartoon book provides vivid description of pain and suffering of comfort women or sex slaves during the Japanese colonial rule of Korea, and is based on testimonials by Lee. Humanity, a liberal daily in France, honored the book with a special prize in its first Humanity Cartoon Awards, which took place recently.

The Japanese edition publishing committee started a “crowd funding” campaign targeting ordinary people from this month to raise funds online including social media and the internet in order to secure the publishing cost. The campaign already achieved the original target of 1.45 million yen (approx. 13,000 U.S. dollars) within a period of less than a month. “Many people have come forward to remember and spread what Lee has to say. It is for this reason that we are pushing to publish ‘Pool,’” Ikeda Eriko, a co-chair of the committee and the director of Women’s Active Museum on War and Peace (WAM), told the Tokyo Shimbun.