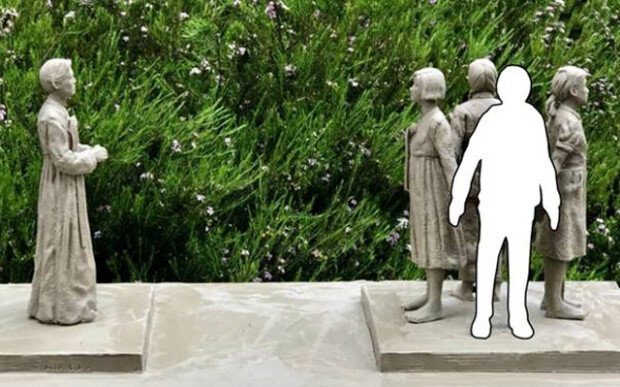 A commemorative statue will be established for comport women victimized by the Japanese troops during World War II on Mt. Namsan under the auspice of Korean nationals living in the United States.

The Seoul Metropolitan Government announced on Monday to hold an unveiling ceremony for a statue in commemoration of war-time sex slaves around the Seoul Education Research & Information Institute on Wednesday or a Memorial Day for Comfort Women commemorated nation-wide. Late Kim Hak-soon, one of the comfort women, gave an official testimony about her painful experience for the first time on Aug. 14, 1991.

The statue describes three girls, which represent Korean, Chinese and Filipino victims, confidently looking at the front holding hands and Kim watching the girls. However, there remains a spot next to the statue. A city official explained that it does not have a tier so that people can come closer to look at the issue of comfort women.

The Guksadang Shrine used to be located around the current Seoul Education Research & Information Institute. After it was demolished, a Japanese national shrine was established under Japanese rule. Seoul City explained that the historical and accessible site was chosen to increase public awareness of the comfort women issue and strengthen public memories.

American artist Stephen White designed the statue, which was funded by Korean nationals living in San Francisco in support of non-governmental organization Jin Duck & Kyung Sik Kim Foundation. The artist designed a commemorative statue for comfort women, the first of its kind established in a major U.S. city. Having been fabricated for more than a year between last summer and this June, it was delivered to Seoul from Busan Port last month.

A public naming contest is to be held starting from Friday to Nov. 30. Download an application form on the website of the Korean Council for Justice and Remembrance for the Issues of Military Sexual Slavery by Japan and submit it via e-mail. The signboard hanging ceremony will be held in December.