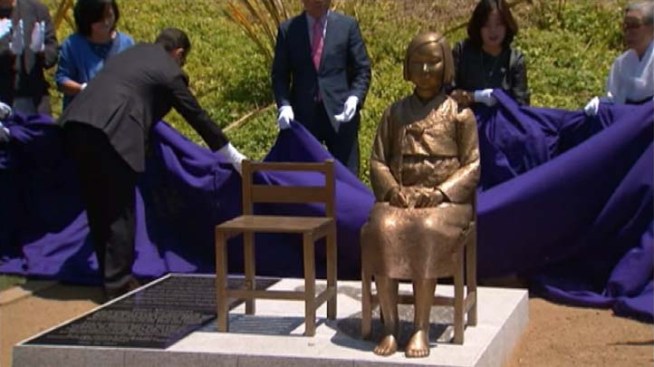 Police Saturday sought help from the public in tracking down whoever vandalized a Glendale monument that commemorates Korean “comfort women” from World War II.

Someone smeared an unknown substance on the Korean Comfort Women Peace Monument and shattered several nearby flower pots on Thursday at Glendale Central Park in the 200 block of Brand Boulevard, according to Glendale Community Relations Coordinator Eliza Papazian.

Glendale police are following potential leads into who defaced the monument, which was installed in July of 2013 with the cooperation of the Korea-Glendale Sister City Association, Papazian said.

The term “comfort women” refers to women and girls who were treated as sex slaves in areas conquered by the Japanese. The monument, which depicts a so-called comfort woman, was paid for and is maintained by the Korean American Forum of California, Papazian said.

“The City Council supported the installation of the Comfort Women Peace Monument as a lasting tribute to the suffering of women and girls of many nationalities during World War II and to promote peace between all,” according to a statement from Glendale Mayor Ara Najarian. “The city of Glendale takes this incident very seriously and will take all measures to apprehend the perpetrators and hold them accountable in court.”

Anyone with information about the vandalism was urged to call the Glendale Police Department at 818-548-4911.

Anonymous tips can be submitted through Crime Stoppers at 800-222-TIPS or lacrimestoppers.org.