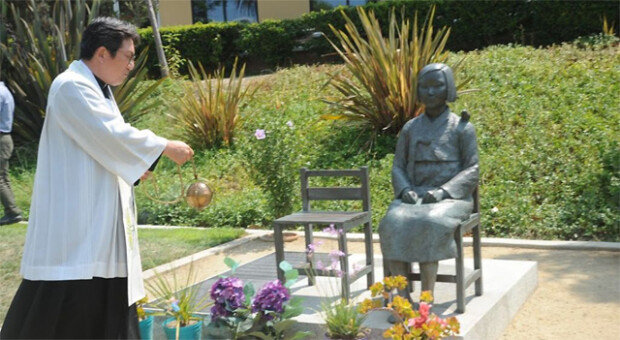 The Glendale Peace Monument marked the fifth anniversary of establishment on Tuesday. This statue was the first one of its kind installed in the United States to commemorate the so-called comfort women, who were forced into sexual slavery by the Imperial Japanese Army before and during World War II.

The Korean American Forum of California, which had led the establishment of the statue, held the ceremony to celebrate the fifth anniversary on Saturday morning at Glendale Central Park & Central Library auditorium, where Glendale city officials, Korean religious leaders and Korean Americans attended.

Comfort woman victim Lee Yong-soo (age 90), who performed a one-person protest in front of the UNESCO headquarters in Paris, France in March requesting to register the comfort women records of the Japanese Army as a world record heritage, expressed her gratitude through a message she sent to the Korean American Forum of California to commemorate the fifth anniversary of the statue.