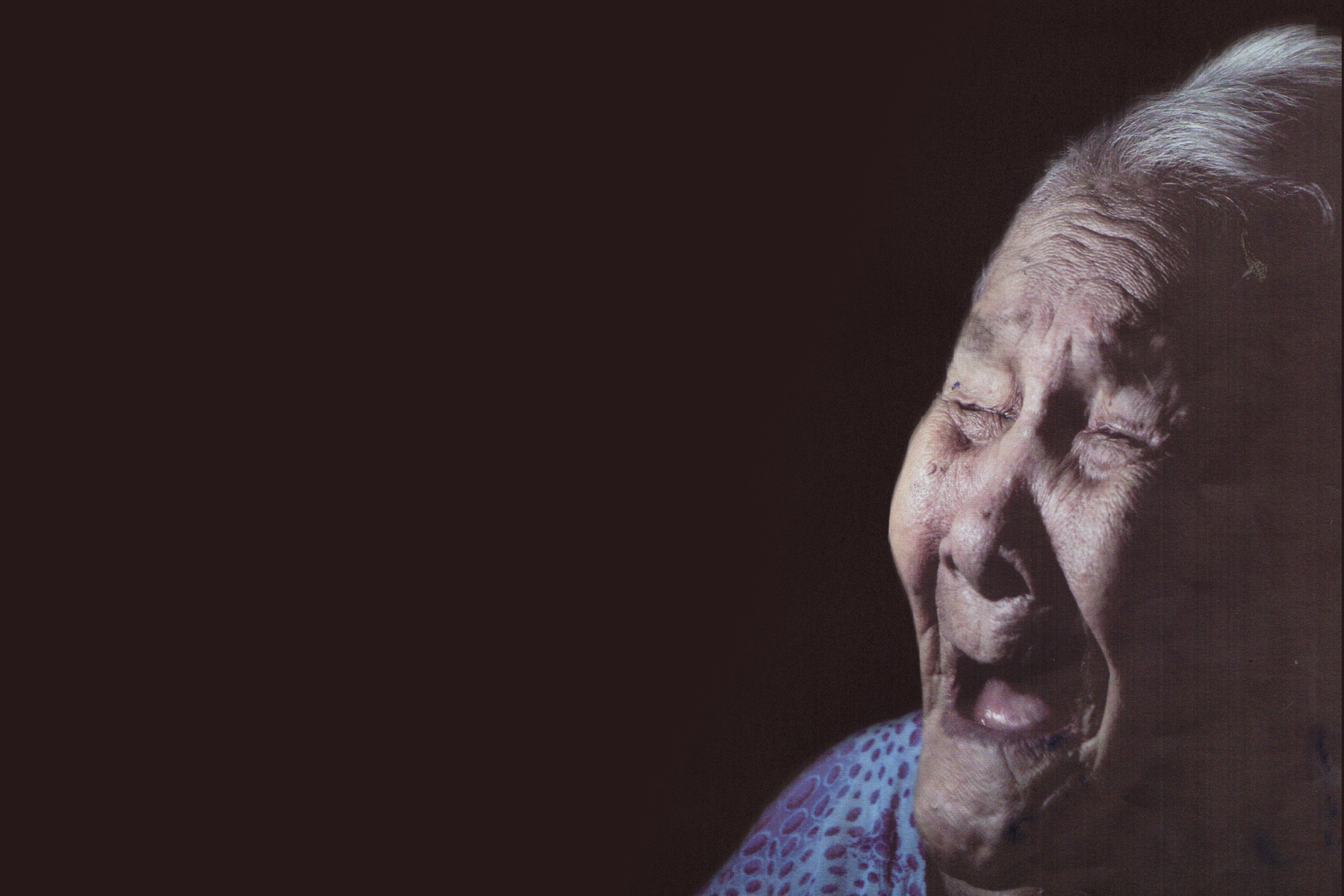 AT 91 years old, her hair was now silky white, her skin wrinkled, her legs wobbly, and her eyes filled with milky cataract. But she could still freshly recall her 18-year old self inside those four walls – the blood and beheaded corpses of some nine innocent “comfort women” flooded the wooden floors. They were all dead. Raped. Maimed. Butchered like pigs.

She was the last woman standing.

Lourdes Divinagracia – or Yay Oding as she was fondly called – was born on Feb. 11, 1925 in Barangay Buyo, Sta. Barbara, Iloilo. Before the war broke out, she worked as a nanny to the three children of Tokumori and Uta Miyasato, pre-war Japanese migrants who lived peacefully alongside Ilonggos.

In 1942, Japanese troops stormed Iloilo. Together with many horrified Ilonggos, Yay Oding ran toward the mountains and hid in man-made holes on the ground to escape the morbid hands of the Japanese. It seems like every other veteran’s story, but it was worse for young women, worst for 17-year-old Yay Oding.

Years after the violence seemingly passed, Yay Oding worked as a waitress at Kotobuki, a Japanese restaurant in Iloilo City which was used to be housed in the Villanueva Mansion across the old provincial jail, now a museum. This was no usual restaurant as it was also a haven for “extra service.” After the waitresses served food, the Japanese soldiers would rape them at gunpoint.

Yay Oding was spared from this. Her boss Tokumori, who got widowed, fell in love with her. So when the troops went on a rape-killing spree that brutal night, Yay Oding was left untouched, protected by the man who worked as the Japanese Imperial Army’s interpreter.

What adds to the horrors of sexual slavery during the war is that these were neither accidental nor isolated cases. Historians claim that “comfort stations” had a system organized by government officials.

In a BBC article by Jane McMullen, she wrote: “In the 1930s, it was discovered that Japanese troops would go on raping sprees. Recognizing the threat of the spread of sexually transmitted diseases, the Japanese Imperial Army devised a system to regulate sexual activity through the use of full-time slaves, who they called comfort women.”

These women were then classified under Japanese military supplies as “ammunition,” sometimes, “amenities.”

“The comfort women suffered other bodily injuries due to constant beatings inflicted by the Japanese soldiers in the course of the rape. Chopping of women’s breasts and forced abortion were also prevalent,” Maria Rosa Henson, the first Filipino to come out publicly as a former comfort woman, wrote.

Another study by the Philippine government in 2002 showed the organization of the Japanese in the orchestration sex slavery.

After Yay Oding ran away, she married Tokumori and without any hesitation, adopted the latter’s children whom she treated as her own blood and flesh.

But her ordeals did not stop after she escaped the horrors of Kotobuki. She kept her marriage to a Japanese man a secret, terrified that she will be killed if someone else knew.

Of the three Japanese children, one is living today. She is Salvacion “Sichang” Sequio, 76 years old. She was two years old when her mother died in prison and she was immediately taken under the care of Yay Oding together with her two siblings.

Fearing for the young children’s life, Yay Oding would introduce the toddlers as her own.

After all she has been through, Yay Oding transformed into the face of Filipina resilience: a brave forgiver, a graceful fighter, and a never quitter.

Many comfort women suffer from Post-Traumatic Stress Disorder (PTSD). Even after 70 years after the war, most still have “avoidance behavior, intrusive and distressing recollections and anger.”

The wounds are deeper as they were just young girls when they were coerced into sex slavery. The euphemism “comfort women” is technically incorrect as most of the sex slaves during the war were only 13 to 18 when they were abducted.

Maybe this explains why it was only 1992 when a lola came forward as a comfort woman. There are 174 of them on the record but many would rather have their secrets buried rather than have those wounds opened again.

Of the half, Yay Oding is the last in Iloilo.

When Yay Oding got married to a Filipino soldier after the Japanese war, she bore six children – five boys and one girl.

When asked how many grandchildren she has, Yay Oding enthusiastically exclaimed: “Baw! Subra na siguro singkwneta!” She then burst out a laughter.

Yay Oding starts and ends her day praying the rosary. She is an energetic, happy, old, woman. She still sings those Japanese songs she used to perform in Kotobuki, gives her own vibrato rendition of “Iloilo ang Banwa Ko,” and busts her kiay-kiay dance moves.

Indeed nothing can stain a Filipina’s resilience. Yay Oding does not let her past define her, instead she has become the epitome of how a woman can pull through the worst of times and still crack silly jokes and show off her genuinely beautiful smile. At the ripe age of 91, Yay Oding still sees the world with wonder.

In 2007, Japanese Prime Minister Shinzo Abe still holds on to their claim that there is no evidence that women were forced into sex slavery by the Japanese Army during World War II.

He said: “There has been debate over the question of whether there was coercion. But the fact is, there was no evidence to prove there was coercion as initially suggested. That largely changes what constitutes the definition of coercion, and we have to take it from there.”

For comfort women in the Philippines and all over Asia, no signs of an official apology or even an admission of fault, to say the least, is barely visible.

Maria Evelina Galang of LILA Filipina said: “The Japanese government is doing their best to erase history. They say there is no evidence, but I have heard the evidence, I have touched the evidence. When I spoke to the locals, they would take my hand and bring it to wounds in their body – places where they were hit by soldiers or cut by knives, cigarette burns, bumps, scars, and bruises.”

Mighty warriors. Brave men. Fearless conquerors. History books tell us infinite tales of them. Thousands of pages of bloodshed, battlecries and victories. But along those words are the unseen carnage, the unheard rallies and the dusted off stories of our comfort women.

For the many, the war ended in 1945 as mighty warriors let down their guns, as battleships and tanks started to rust, and the dust gathered in the memories of heroes. But for Yay Oding and the many Filipina comfort women whose scars still tells the horrors of the past, whose horrid memories still haunt them in their nightmares, the battle still goes on. Not until they are no longer ignored by the governments, shoved away by justice systems, and unheard in history books, the war will never be truly over.

* A version of this story was published in the June-October 2016 issue of Dimensions, the official student magazine of West Visayas State University. Yay Oding died on Feb. 11, 2018./PN