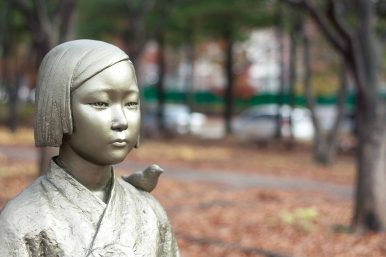 The Reconciliation and Healing Foundation, established in 2016 to support the victims of Japanese wartime sex slavery, often referred to as “comfort women,” will be dismantled after just two years. The foundation took center-stage in a major controversy that has left Korea and Japan divided more than ever in recent years following an agreement signed in 2015.

South Korea sent an official notification to Japan on the dismantlement of the foundation, the process of which is expected to take somewhere between six months and a year. Experts argue that Korea and Japan will engage in constant exchanges during this period as they collide over the matter of preserving or dismantling the foundation as well as the agreement itself.

The foundation was a result of an agreement that was signed between the two countries in December 2015 under the Park Geun-hye administration in South Korea. The accord stipulated the intention of both states to “establish a foundation whose purpose is to support former sex slaves,” and to “dispense all funds necessary from Japan’s government budget to restore honor and dignity of the victims.”

The success of the agreement depended not only on the establishment of the foundation, but also on an apology given by the prime minister of Japan, Shinzo Abe. The Reconciliation and Healing Foundation began carrying out its official responsibilities in July 2016 using the 10 billion won ($8.8 million) budget provided by the Japanese government to pay compensation to the victims and their families. The result was 4.4 billion won given to 34 survivors and the families of 58 who had passed away.

Abe made it clear in October 2016 that he had “not even a single bit” of intention to send a letter of apology that was to be provided in accordance with the agreement.

Without an apology, the sex slave victims and advocates in turn refused to accept the agreement along with the compensation, and the position of the foundation naturally began to crumble.

“We will strive to restore honor and dignity of the sex slave victims,” said Jin Seon-mi, South Korean minister of gender equality and family as she delivered the official decision for the dismantlement.

“Under the ‘victims first’ principle, we have decided to dismantle the foundation based on the feedback we’ve collected about the foundation.”

South Korea’s decision is a clear refutation of the Korea-Japan agreement which, from a South Korean perspective, lacks sufficient sincerity.

There is still a long way ahead until any form of dismantlement is achieved. The foundation will now begin to take settlement procedures which is expected to take at least six months, perhaps as much as a year, before it is finally dissolved.

Another major question is what to do with the 10 billion won fund given by Japan. The South Korean government has indicated that the 4.4 billion won already distributed to victims and their families cannot be annulled. As an alternative, the government raised a separate 10.3 billion won budget to return the Japanese fund.

Many expect that Japan will not accept the foundation’s dissolution, since the fund is the focal point of the final resolution of the sex slave issue for Tokyo. Accepting the fund will impose Japan with another round of tasks to engage with South Korea to discuss the matters of a formal apology and compensation.

“We will listen to the victims and advocates as we come up with measures to deal with the 10.3 billion won budget,” said Roh Kyu-deok, spokesperson for South Korean Ministry of foreign affairs.

“We will continue to negotiate with the Japanese government based on those measures.”

By Hyunmin Michael Kang, The Diplomat