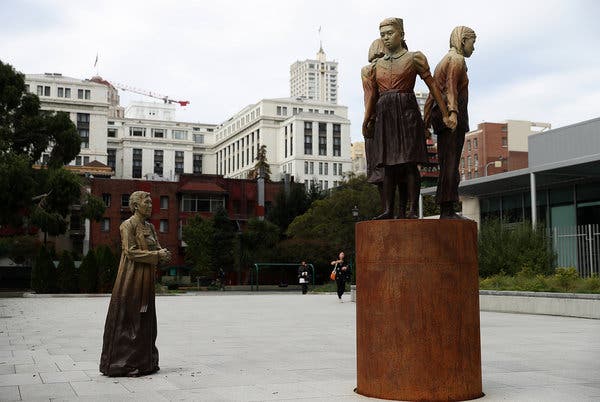 The monument has stood in San Francisco for a year. It depicts young women from Korea, China and the Philippines standing on a pedestal holding hands, while a statue of Kim Hak-sun, a Korean activist, gazes up at them.

But the view from Osaka, Japan, of the memorial, which commemorates the tens of thousands of “comfort women” who were detained and raped by Japanese soldiers before and during World War II, has been critical. This week, the controversy boiled over as Osaka officially severed its sister-city partnership with San Francisco.

In a letter dated Tuesday, Osaka’s mayor, Hirofumi Yoshimura, followed through on a threat issued a year ago to end his city’s longstanding relationship with San Francisco in protest of the monument, saying it presented a one-sided message.

“I earnestly request that you promptly remove” the memorial and an accompanying plaque “without further delay,” Mr. Yoshimura wrote, according to an emailed copy of the letter. He added that he would revive ties with San Francisco if they were removed from city property.

That is not going to happen, according to Judith Mirkinson, the president of the Comfort Women Justice Coalition, an alliance of immigrant women’s groups that worked for years to erect the statue and funded it through private donations.

“It is not coming down,” she said.

Jeff Cretan, a spokesman for Mayor London Breed, told local news outlets on Tuesday that he expected some of the ties between the two cities to continue through members of a citizens’ San Francisco-Osaka sister city committee and their counterparts in Osaka.

On Thursday, Ms. Breed said in a statement that one mayor could not unilaterally end a relationship that has existed between the two cities for more than 60 years.

She described the memorial as “a symbol of the struggle faced by all women who have been, and are currently, forced to endure the horrors of enslavement and sex trafficking.”

“These victims deserve our respect and this memorial reminds us all of events and lessons we must never forget,” she added.

Japan’s position on comfort women has been evolving for decades. In 1993, it officially acknowledged that its wartime military had forced women to work in brothels. Former comfort women began to speak out about being forced into brothels, euphemistically called “comfort stations,” in territories occupied by the Imperial Japanese Army.

A United Nations investigation in the 1990s found that comfort stations were in use as early as 1932 and that as many as 200,000 women had been enslaved by the time the war ended in 1945. Most of the women are thought to have been Korean, but some were from China, the Philippines and other countries.

The issue still strains the relationship between South Korea and Japan, two key United States allies whose cooperation is vital to checking North Korea and to balancing China’s power in East Asia.

The sister-city partnership was established in 1957 between Osaka and San Francisco, a city with an Asian population of about 40 percent. In recent years, it has supported student exchanges and cultural events, said Julie Tang, a chairwoman of the Comfort Women Justice Coalition.

But it also set the stage for the monument, known as “Comfort Women: Pillar of Strength,” to become a lightning rod between the two cities.

Several years ago, the coalition and 11 human rights groups organized a grass-roots campaign to build the memorial. In 2015, the city’s board of supervisors approved the construction of the mostly bronze monument.

Despite several letters from Mr. Yoshimura and his predecessor objecting to the statue, it was unveiled in downtown San Francisco on Sept. 22, 2017, the first such statue in a major city in the United States. A city resolution later proclaimed that date to be known as Comfort Women Day to honor the victims.

In November 2017, Mayor Ed Lee of San Francisco signed a resolution to formally designate the statue a city monument. The controversy widened. Prime Minister Shinzo Abe of Japan said the move was “not only deeply regrettable, but it also opposes the views of the Japanese government.” Mr. Yoshimura said he would scrap the sister-city ties by the end of the year.

But in December, Mr. Lee died in a hospital after collapsing at a supermarket, and Mr. Yoshimura held off until July, when he sent a letter outlining his objections to Ms. Breed.

In his letter on Oct. 2, with no action taken on the statue, Mr. Yoshimura said the two cities’ official ties were no longer possible, and he highlighted one of his objections over the inscription, which says in part:

“This monument bears witness to the suffering of hundreds of thousands of women and girls, euphemistically called ‘Comfort Women,’ who were sexually enslaved by the Japanese Imperial Armed Forces in thirteen Asian-Pacific countries from 1931-1945.”

He said he would support an inscription that raised awareness about sex trafficking “equally applicable to all countries.”

“He wants to remove the memorial because he is afraid of the truth,” said Lillian Sing, a retired Superior Court judge and a chairwoman of the coalition. “Removing it does not eradicate history.”