U.S. Officials Meet Former Sex Slaves
Two women who were forced into sexual slavery by the Japanese Imperial Army in World War II recently visited the White House and State Department to testify about their ordeal.

Lee Ock-seon (87) and Kang Il-chul (86) are among a handful of survivors of the atrocity. It was the first time officials of the White House and the State Department met the victims.

The two women arrived in the U.S. to coincide with the first anniversary of monuments in their honor in Glendale, California and New Jersey.

On July 30, they spoke at the White House with Paulette Aniskoff, the director of the Office of Public Engagement, for about two-and-a-half hours. The two women asked for the U.S. government’s help in their quest for justice before all the elderly victims are dead.

On July 31, the two met with officials of the Bureau of East Asian and Pacific Affairs at the State Department. Their visits had been arranged by Rep. Mike Honda, who played a leading role in the U.S. House of Representatives passing a resolution on the victims in 2007. 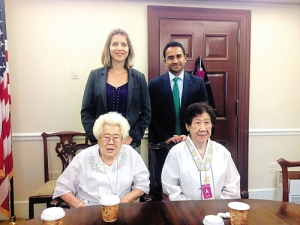 6 thoughts on “US Officials meet the former sex slaves”