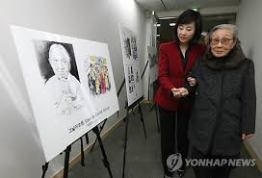 SEOUL, Jan. 27 (Yonhap) — South Korea has more than doubled its budget this year related to former sex slaves to the Japanese military during World War II in an effort to raise global awareness about the issue, officials said Monday.

The government allocated 4.58 billion won (US$4.23 million) for programs and events for the euphemistically called comfort women this year, up 130 percent from 2 billion won in 2013, the Ministry of Gender Equality and Family said.

The 4.58 billion won budget includes 1.2 billion won in direct support to the elderly women, it added.

The budget for various commemorative events and government-led programs aimed at restoring the honor of the victims, in particular, has risen sharply from 783 million won to 3.38 billion won, according to the gender ministry.

The government plans to spend 3.38 billion won in producing films and documentaries about the victims and sponsoring a special exhibition during the world’s largest comic strip and cartoon festival set to open in France this week, issuing government reports and hosting a symposium on wartime sexual violence, officials said.

“The government will gradually increase its support every year tailored to the former victims who are now old and unhealthy, and work closely with various nongovernmental organizations, experts and international organizations to settle the comfort women issue,” Cho Yoon-sun, minister of gender equality and family, was quoted in a release as saying.

Historians say up to 200,000 women, many of them Korean, were coerced into sexual servitude by the Japanese army at front-line brothels during World War II when the Korean Peninsula was a Japanese colony.

Of the 237 Korean women who reported themselves as former sex slaves, only 55 are still alive.

One thought on “S. Korea ups budget on former sex slaves for Japan”