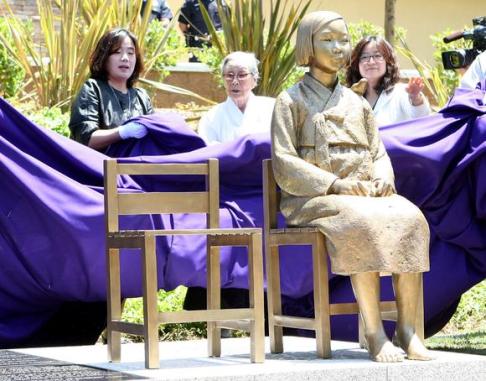 A 1,110-pound bronze statue — and the controversy surrounding it — is Glendale’s newsmaker of the year.

The “comfort women” statue in Central Park honors an estimated 80,000 to 200,000 women who suffered during a government-sanctioned prostitution system set up to serve Japanese soldiers during World War II. A heated debate began even before it was installed in July and it continues to drive news headlines in Japan and Glendale.

The statue, the first on the West Coast, continues to drive discontent in Japan as some conservatives there believe the women from Korea, China, Philippines and other countries acted willingly as prostitutes, rather than being coerced into prostitution, as former comfort women claim.

Some Japanese and Japanese Americans disagree with the statue even though a former Japanese Prime Minister sent letters of apology to former comfort women in the 1990s and the country’s Ministry of Foreign Affairs has confirmed that women were indeed deprived of their freedoms.

The statue, which features a young woman in a traditional Korean dress with a bird on her shoulder sitting next to an empty chair, sparked a letter-writing campaign to city officials and local media, generating more than 1,000 emails. It prompted Glendale’s sister city in Japan, Higashiosaka, to consider cutting ties with the Jewel City.

A Higashiosaka councilman met with Glendale Councilman Frank Quintero this year to try and convince him to remove the statue and three members of the Japanese Parliament came to speak with Los Angeles-based Japanese American groups about the statue earlier this month.

Despite the controversy, four out of the five Glendale council members continue to support it. Mayor Dave Weaver, who voted against the memorial from the beginning, has said he regretted that Glendale installed it.

Korean groups, including the Korean American Sister City Assn. in Glendale, aim to install more statues like the one in Glendale to spread awareness of comfort women in the United States as well as encourage Japanese politicians to pen a resolution apologizing for the prostitution system overseen by the army. The roughly $30,000 Glendale statue was paid for by Korean groups.

Korean American lobbyists asked Buena Park to install a similar statue, but that council rejected the proposal because they did not want to get involved in what they considered an international issue.

The statue is a replica of one in front of the Japanese Embassy in Seoul, where weekly protests on behalf of former comfort women take place.